Donald Trump appears be getting back on the campaign trail, albeit virtually, by sending a stream of tweets from hospital where he is being treated for COVID-19.

The president was admitted to the Walter Reed Medical Centre in Maryland on Friday evening, after having a fever and receiving supplemental oxygen at the White House following his positive test for coronavirus the night before.

While staff at the hospital say Mr Trump's condition is improving, his Twitter habits are one of the strongest signs yet that he appears to be recovering, after posting of series of messages early on Monday morning. Mr Trump has been encouraging people to vote for him while giving a list of things that he has achieved, wants to achieve, or simply what his stance is on certain issues, by sending 18 tweets in less than an hour.

He sent his first message at 6.19am (11.19am UK time), claiming the US stock market is "getting ready to break its all-time high".

He also claimed the Democrats would increase taxes and "shut our economy and jobs down".

Mr Trump then went on to talk again about "stock market highs", as well "law and order", "religious liberty" and "space force", all followed by an instruction to "vote!" and all in capital letters.

He also tweeted about other topics including healthcare, abortion, regulation cuts, gun rights and what he calls the "fake news media".

Meanwhile, his drive-by for supporters on Sunday has been criticised as "insanity" by a top doctor.

Mr Trump, 74, briefly left the medical centre so he could greet the crowds waiting outside the hospital.

He sat in an armoured SUV, wearing a mask, and waved to people as he was driven along the road to cheers and flag-waving.

Dr James Phillips, chief of disaster medicine at George Washington University and an attending physician at the Walter Reed Medical Centre, described the drive-by as "insanity". 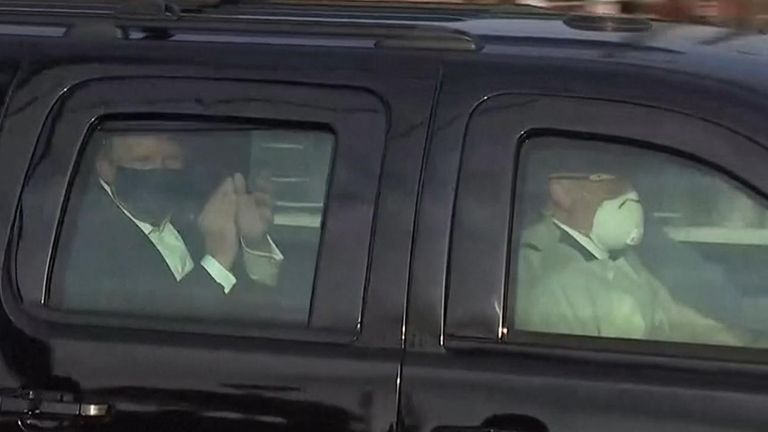 He wrote on Twitter: "Every single person in the vehicle during that completely unnecessary presidential 'drive-by' just now has to be quarantined for 14 days. They might get sick. They may die. For political theatre. Commanded by Trump to put their lives at risk for theatre. This is insanity."

Many of the president's physical campaign events in the run-up to next month's election have been moved online, or postponed, leaving him to rely on his digital audience.

Vice President Mike Pence will take over some of the bigger events in Mr Trump's absence this week.

Voter registration for the 3 November election ends today in a number of states, including swing states such as Florida and Arizona, prompting a push for citizens to register, ready for the ballot.

Mr Trump could be discharged from hospital today, after doctors told reporters that the president continues to get better.

:: You can watch the Vice Presidential Debate between Mike Pence and Kamala Harris on Thursday at 2am live on Sky News and Sky News online