It comes after several days of confusion as 16,000 cases in England were missed by the NHS Test and Trace scheme.

It led to a large spike of nearly 23,000 cases being reported on Sunday and means that in some clusters the disease was allowed to spread unchecked.

Public Health England (PHE) said a technical issue had meant 15,841 cases between 25 September and 2 October were left out of daily reports.

A problem with an Excel spreadsheet reaching its maximum size has been blamed.

The government said 6,500 staff had been drafted in over the weekend to track down contacts of the missed cases.

Health Secretary Matt Hancock said 51% of the cases had been contacted a second time by Monday morning, with efforts to trace their contacts going on at the same time.

Speaking in the Commons, he added: "The chief medical officer has analysed that our assessment of the disease and its impact has not substantially changed as a result of these data."

However, the error means the weekly infection rate has soared in dozens of areas of England.

The city's infection rate has more than doubled in seven days.

Monday's 19 new reported deaths were all in England and take the UK total to 42,369.

They record people who died within 28 days of their first positive test, though coronavirus may not be the actual cause of death in all cases.

England recorded the vast majority of the latest new cases, with 10,685. 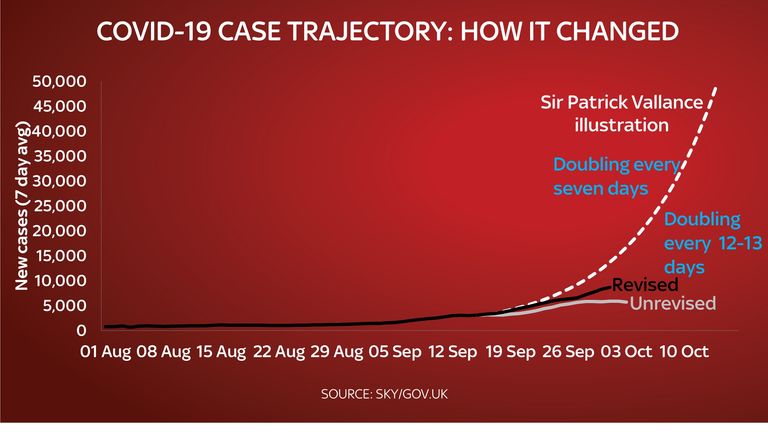 Image: Current trajectory against the government warnings two weeks ago

Even with the missed cases added, the trajectory of the disease is still significantly slower than possible scenarios outlined a few weeks ago.

It also much lower than the 100,000 infections per day that many experts estimate for the peak of the pandemic in spring when there wasn't widespread community testing.