Police have made 10 arrests after four young people - including three university students - died in suspected drug incidents over the weekend.

An urgent drugs warning was put out by Northumbria Police earlier and a large-scale investigation is under way.

The four suspected drug deaths are:

Officers were called to the first death shortly after 6am on Saturday and found an unresponsive woman at Newcastle University's Park View student village in Richardson Road.

The 18-year-old, who was a student at the university, was pronounced dead at the scene. It is believed she had taken ketamine.

An 18-year-old man was arrested on suspicion of supplying a Class B drug and has since been released on bail.

Shortly before 4pm on the same day, police were called to an 18-year-old man in cardiac arrest in Washington.

The man, who had reportedly fallen ill after taking MDMA, was treated by emergency services but pronounced dead a short time after.

Seven people have been arrested in connection with the incident and released under investigation. 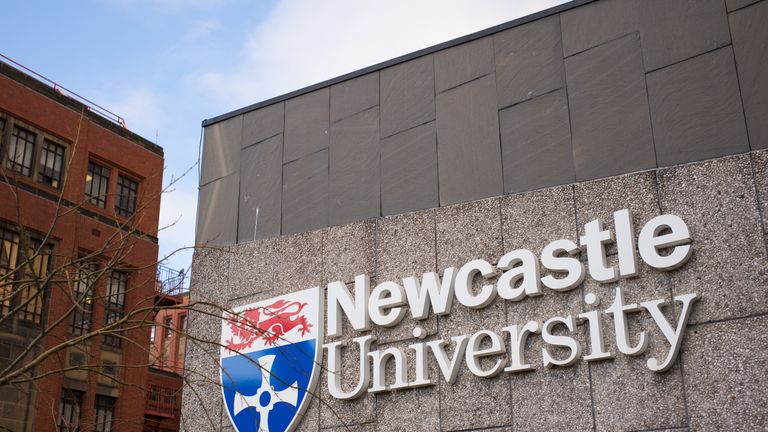 Image: Two of the students were found in the same building at Newcastle University

On Sunday, officers were called at 8.13am to reports a 21-year-old student from Northumbria University had fallen ill after it is suspected he took MDMA.

He was taken to hospital but died a short time later.

A 20-year-old man has been arrested on suspicion of supplying Class A drugs and released on bail.

Later, at around 1pm, police were called to the same building at Newcastle University they had visited the day before.

Another 18-year-old female student had died and it is believed ketamine was found at the address.

An 18-year-old man has been arrested on suspicion of supplying a controlled drug and released on bail.

Police have carried out room searches in student accommodation at Newcastle University using sniffer dogs, and will also be increasing patrols.

Chief Inspector Steve Wykes of Northumbria Police said: "This weekend we have seen the tragic loss of four young lives and our thoughts continue to be with the family and friends of those who have sadly died.

"Although our investigations are at an early stage and we continue to establish the circumstances around these tragedies, we want to reiterate our warning to people against taking drugs for recreational use. The consequences could cost you your life."

He also urged anyone with information about the incidents to come forward.

Anyone who has taken these drugs and needs emergency medical attention should always call 999.